Methodological Report of the Land Cover Mapping of the St. Lawrence Lowlands

The identification of priority sites for conservation has been the first step of this planning exercise. Conservation planning of natural environments requires a reliable, accurate and up-to-date image of the spatial distribution of ecosystems in the study area. In order to produce an Atlas of Priority Sites for Conservation in the St. Lawrence Lowlands, an updated mapping of the land cover of this vast territory was undertaken.

This project required obtaining reliable information on the natural environments of the St. Lawrence Lowlands. Although several land cover mapping projects have been conducted for specific types of habitats, it was particularly important to obtain a homogeneous product that would cover the entire territory and that would provide the most detailed information on its various thematic components: agricultural, aquatic, human-modified and forest environments, wetlands as well as old fields and bare ground. The methodology used to produce the land cover mapping of the St. Lawrence Lowlands thus relied mainly on combining and enhancing the best existing products for each theme. This mapping also had to meet the following criteria: temporality, reliability, precision, homogeneity and reproducibility.

The geographic information layer resulting from this geomatics process can serve as a guide for regional projects relating to biodiversity conservation, land-use planning, university research or as a visual basis for the production of mapping products. However, given the production scale, it is not possible to guarantee the accuracy of the data at the local scale, and while these data may be used as a decision support tool, they cannot be used to support issues of a legal nature. It is up to the user to take the necessary precautions depending on the intended use of the data.

Since the integrity and functionality of the natural environments of the St. Lawrence River are closely linked to the state of the environments and to human pressures exerted in adjacent areas, the decision was made to map the entire Quebec portion of the St. Lawrence River Lowlands ecoregion. Two adjacent sectors that are particularly important for biodiversity and species at risk were also included in the mapping project: the Covey Hill area in Montérégie and the Île-aux-Grues archipelago in Chaudière-Appalaches. In total, the study area covers more than 3 153 000 ha (31530 km2) (Figure 1). 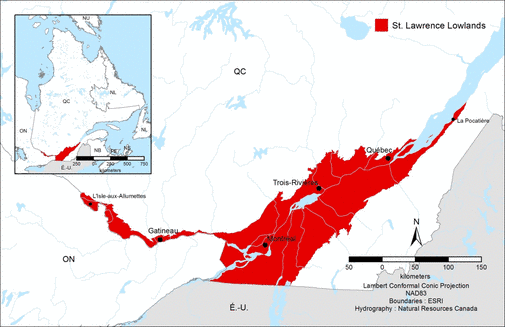 The objective of combining data associated with several land cover themes led to the selection of many different data sources. It was important that each dataset covered the entire study area in order to ensure the homogeneity of the data. Here are the main sources of data used:

In addition to these data, a considerable amount of photo-interpretation work was carried out, which made it possible 1) to update certain outdated or incorrect data and 2) to fill in sectors where no datasets provided information on the land cover.

The data from BDCA 2014 was used for the agricultural environment; the information on crop type was extracted directly from this dataset. However, for the parcels for which the type of crop was not specified, a spatial join with AAFC 2014 data was performed to assign a new class to them.

The detailed wetland mapping data (DUC, MDDELCC) was used. No changes were made to the wetland data at this stage.

The forest polygons were extracted from the 4th decadal SIEF database. The attribute information was retained so that the polygons could be reclassified according to the various criteria if necessary.

First, the gravel pit and dry barren polygons from SIEF were extracted.  Several areas of rocky outcrops from AAFC 2014 data were also added to the mapping. Since the geospatial data of the AAFC mapping come from automated satellite image processing with a pixel resolution of 30 m x 30 m pixels, smoothing was performed to create a visual appearance similar to polygons coming from other data sources.

The environment heavily or slightly disturbed by human activity polygons from the 4th decadal SIEF were used to select the polygons of human-modified environments.

Old field polygons from the 4th decadal SIEF data were first extracted and then combined with those linked to the shrubland polygons of the AAFC 2014. Smoothing was performed in order to improve the visual appearance of the data.

The polygon data from the Cadre de référence hydrographique du Québec (CRHQ) were selected, while retaining their geometry and attribute information.

A total of 8 main road classes were extracted from the BDTQ. Given that certain linear routes have been modified in recent years and that new roads have been built, certain linear features were added from the Transports Québec data. Finally, because the extracted data was in linear format, it was converted to polygons according to a predefined buffer width. This width was determined based on the average right of way of different road classes following a literature review (Jobin et al, 2013).

Once the preparation of the geospatial data for the eight major themes described above was completed, they had to be overlaid according to a very specific hierarchy (figure 2). 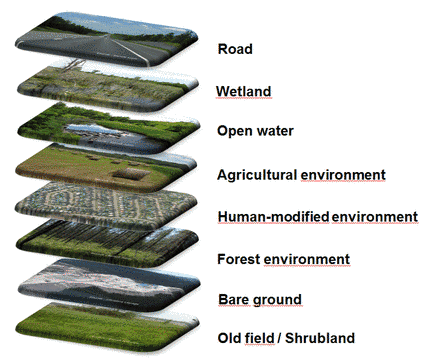 The overlaying of all the information layers caused numerous geometry problems while leaving tens of thousands of empty areas. A protocol was therefore developed in FME Workbench in order to automate the process. This made it possible to combine the polygon layers and eliminate the overlapping elements according to the predefined hierarchy. The processing in the FME software led to the creation of a new layer in which the thousands of polygons larger than 0.5 ha that had no label were isolated. A “Detailed Class” field was added and the data were thus ready for the photo-interpretation process.

The choice of land cover classes was first directly related to the information available in the source data. The data was thus divided into 22 “general” classes representing the basic classification of this mapping project. The goal of this work was to ensure the reliability of the delineation of these 22 classes. However, since the attribute information of the source data had been retained throughout the geospatial processing, a “Detailed Class” field was also created, representing more than 50 detailed classes.

The most extensive step of the St. Lawrence Lowlands land cover mapping project was undoubtedly photo-interpretation. First of all, a detailed class label was assigned to each of the polygons for which no information was available even after all the geospatial layers used were overlaid. Secondly, the nature of the detailed class of a number of habitats that had been modified in recent years was updated. In total, the photo-interpretation process allowed to assign a detailed class label to nearly 350,000 polygons for the entire St. Lawrence Lowlands.

Following the photo-interpretation step, several additional cartographic processes were necessary before creating the final geodatabase. First, the photo-interpretation resulted in the creation of many agricultural polygons whose crop type could not be determined. As stated previously, the AAFC data was used to specify the type of crop where possible.

Next, a number of other geomatics processes were carried out, making it possible to merge neighbouring polygons with identical characteristics, to eliminate polygons with virtually no area, and to correct the geometry errors related to the vertices and edges of the polygons. In addition, all the overlays, merges and cartographic manipulations performed in earlier steps led to certain topology errors within the dataset. All the overlaps and gaps were thus corrected at this stage using ArcGIS cartographic tools available for this purpose. Once the geometry of the polygons was corrected, numerous Python scripts were developed to make the final improvements to the data. The final product is a geodatabase that includes the raw data for the entire study area as well as a version where the study region is divided by administrative region.

A total of 12 maps representing the general classes within the administrative regions of the SLL were produced.  Examples of land use by detailed classes are also presented for four regions with diverse backgrounds.

Many data sets were merged to create the land cover mapping. The information related to each data source used was kept in the geospatial dataset so each polygon is linked to its original source that led to the assignment of its associated detailed class label.

Such an extensive land cover mapping for the whole of the St. Lawrence Lowlands is not error-proof. A validation exercise at the scale of the thematic and general land cover classes was thus performed to evaluate the reliability of the land cover mapping. Of the 22 general classes of the cartography, only the “Unspecified crop” class was not validated.

For an accessible format of this document, please contact us.