The situation of the yellow perch in Lake Saint-Pierre has been a concern for several years. The loss of quality breeding habitat has slowed the growth of this species in many areas, including the Odanak area located on the eastern shore of the Saint-François River. The construction of a new stream in this sector was necessary for the yellow perch to return to the marsh to spawn.

To promote access to this quality rearing and breeding ground, the Odanak Environment and Land Office (BETO) undertook in 2017 to re-establish a permanent connection between the Tardif Channel - an arm of the Saint-François River that flows into Lake Saint-Pierre - and the 2nd Odanak marsh.

An initial assessment of the territory was carried out in 2016, which helped define the components of the site and identify threatened or vulnerable plant species to better protect them. Then, an engineer proceeded to the georeferencing of the site in order to proceed with the layout of the new watercourse and to obtain its geographical coordinates.

The work to develop the stream and to revegetate the site was spread over 2 years. After excavating, cleaning the rocks, and riprapping the banks, a new culvert measuring 12 m long by 1.2 m in diameter was installed to promote the free movement of fish.

Thanks to the financial support of the CIP / ECCC, the collaboration of the local community, residents and partners, this work could be completed:

- Planting of 200 shrubs in the outer curves of the stream, including 50 willows, 50 dogwoods and 100 alders

In addition, an access road leading to the 2nd marsh was built for visitors, while respecting the natural state of the site. Wooden fences were also put in place to ensure the safety of users and an interpretation panel was installed on site.

Since the development, we have noticed that even during low floods, yellow perch can go to the marsh without constraint. In addition, larvae monitoring confirms that spawning occurs every year.

The small tributary streams of Lake Saint-Pierre are facing several problems which are contributing to the degradation of the lake’s water quality and habitats. The main issues are missing or poor-quality buffer strips, streambank erosion, sedimentation and nutrient inputs carried by the tributaries.

A study-action project, funded by the Community Interaction Program of the St. Lawrence Action Plan, was carried out in order to gain a better understanding of the problems affecting the tributary streams of the two regional county municipalities (RCMs) bordering Lake Saint-Pierre. The “study” component involved conducting a characterization exercise of the priority streams in order to describe the nature of the problems and devise intervention plans. Subsequently, the “action” component involved carrying out restoration work on two tributaries identified as priorities for improving the water quality and wildlife habitats of Lake Saint-Pierre.

During the first part of this project, 68 small streams flowing into Lake Saint-Pierre were characterized. For each, a biophysical assessment of the sites was conducted to identify the factors contributing to the degradation of water quality and wildlife habitats. The main problems observed were:

Based on the data collected, an intervention priority code was assigned to each tributary. Each RCM concerned then received an intervention plan outlining the actions recommended to improve the state of their streams. These plans were also submitted to the Quebec Department of Forests, Wildlife and Parks and the Quebec Department of Sustainable Development, Environment and the Fight against Climate Change.

The last phase of the project involved implementation of the recommendations aimed at restoring the Lavigne Stream of the D’Autray RCM and the stream in segment 7 of the Nicolet-Yamaska RCM. The following are a few figures which illustrate the restoration work carried out for these two streams.

The project involved carrying out restoration and enhancement work affecting an area of 67,772 m2 of the stream and its buffer strip, i.e.:

The project involved carrying out restoration and enhancement work affecting an area of 32,051 m2 of the stream by creating buffer strips and a forest corridor, i.e.:

Restoration and enhancement of the mouth of the Brochu River

The mouth of the Brochu River is an exceptional natural environment of the North Shore region. Sheltered by a sandy spit that runs parallel to the shore, there is a small bay that includes a 17 ha salt marsh. The mixing of freshwater from the St. Lawrence River and saltwater from the Gulf of St. Lawrence creates a unique environment that is home to a variety of wildlife species.

However, this exceptional site is subject to various natural and anthropogenic pressures. For example, there are problems of natural erosion, as well as problems of habitat loss and degradation of the spit caused by the frequent passage of off-road vehicles (ORV).

In order to protect this fragile environment, between 2013 and 2016, the Gulf North Shore ZIP (area of prime concern) Committee carried out a project to restore and enhance the mouth of the Brochu River and its salt marsh. The activities undertaken during the two phases of the project included building observation structures, developing public awareness-raising tools as well as restoration of approximately 10,000 m2 of the spit by planting nearly 70,000 sand ryegrass plants. This revegetation has had a number of positive impacts, such as improving the habitat of several species, including the nesting sites of the Common Tern.

You can learn more about the various components of this project, supported by the Community Interaction Program of the St. Lawrence Action Plan, by consulting the guide on the salt marsh of the Brochu River produced by the Gulf North Shore ZIP Committee (available in French only).

Restoration of natural areas in the Matane region

Since 2002, the environmental group Uni-Vert has been restoring several natural sites located at the cliffs along the shore of the St. Lawrence River in the Matane region. This group's interventions have helped preserve local biodiversity by restoring existing habitats, by preventing eroded material from filling habitats located at the foot of the cliffs, and by stabilizing the coastal environment.

To control the erosion process in the cliffs and to prevent them from collapsing, Uni-Vert is continuing its efforts to restore habitats in Petit-Matane by installing brush mats and wattle fences. The photos below show the growth of the new vegetation that was planted for this purpose in spring 2014.

The Réserve naturelle des Battures-de-Saint-Augustin-de-Desmaures is located on the shores of the St. Lawrence River near an urban area and farmland. To ensure the preservation of this important natural environment, the Fondation québécoise pour la protection du patrimoine naturel (FQPPN), together with the Corporation du bassin de la Jacques-Cartier, characterized the 12 watercourses that run through the Reserve, creating an inventory and mapping the problems, such as erosion, shoreline degradation, invasive plant species or water pollution, that affect the watercourses.

Following the characterization, the FQPPN created an intervention plan that includes specific action to remedy the problems. The intervention plan also targets potential stakeholders, enabling us to rally local stakeholders around common issues and make them aware of the importance of preserving these watercourses and, by extension, the St. Lawrence.

This project, which allowed for a useful diagnosis, is a great example of co-operation between the FQPPN and the Corporation du bassin de la Jacques-Cartier. The participants are now ready to take action and are already co-operating to this end with the municipality of Saint-Augustin-de-Desmaures. This project is all the more important given the rapid development of the Quebec City metropolitan region.

The intervention plan can be consulted on the FQPPN’s website at www.fqppn.org under the Publications heading. 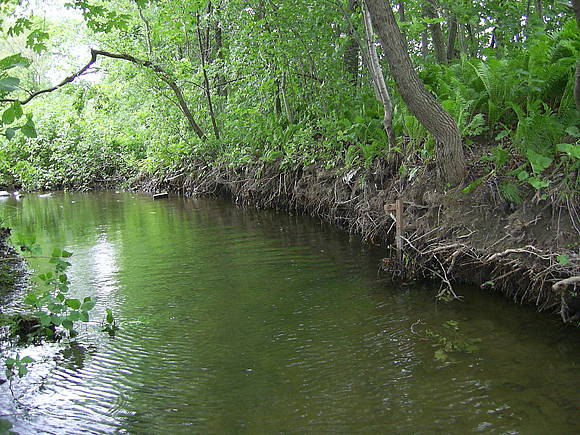