However, one question remains: is swimming in the St. Lawrence safe?

To answer this question, the scientists of the St. Lawrence Action Plan evaluated 16 potential freshwater swimming sites between Montreal and Île d'Orléans.

Between 2003 and 2019, scientists repeatedly visited these sites to assess bacteriological water quality and E. coli concentrations. Weekly monitoring was conducted during the summer period from late June to late August from 2003 to 2009, as well as from 2017 to 2019.

Based on the datas obtained, sites were assigned an A (excellent) to D (polluted) rating based on bacteriological water quality. 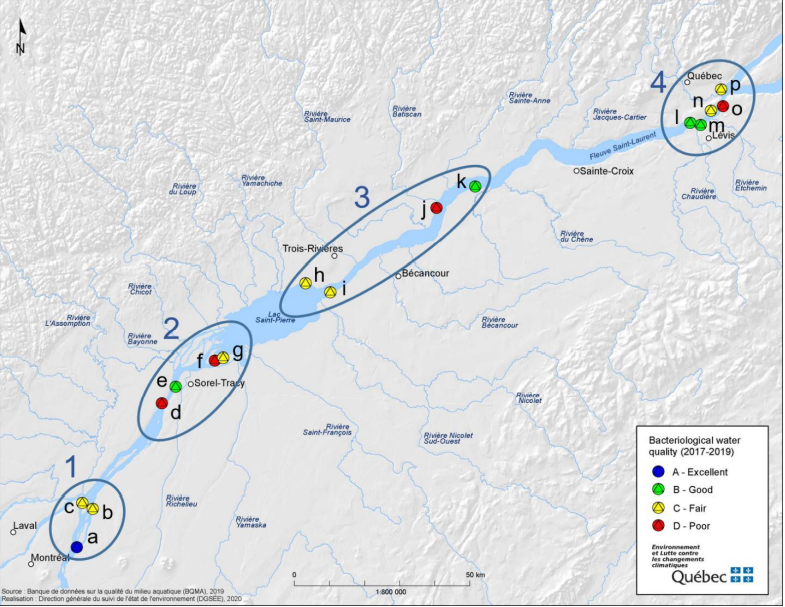 Four indicators were also used to interpret the quality of the sites: seasonal bacteriological quality, percentage of swimmable days, percentage of sites with good potential and percentage of dry weather.
Here is the findings reported by scientists for the years 2017 to 2019:

Combining these results, the scientists concluded that the overall condition of freshwater swimming sites in the St. Lawrence between Montreal and the western tip of Île d’Orléans remains intermediate, a state that has been stable since 2003.

It was also noted that water quality varies by location and is degraded downstream of the Montreal urban area, particularly due to the discharge of non-disinfected wastewater from the Montreal area and wastewater overflow during rainy weather.

In addition, the following components were considered in the assessment of swimming site quality: precipitation (percentage of dry weather), tidal effect and water depth. These factors can influence the bacteriological quality of the water.

The data collection and analysis carried out by St. Lawrence Action Plan scientists allow us to better understand the state of swimming sites along the St. Lawrence and to evaluate whether new sites could be opened to swimming.