Great Blue Heron: A Sentinel Species for the State of the St. Lawrence 2015 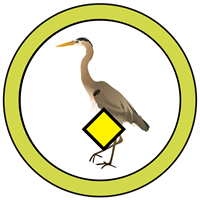 Indicator: Contamination of the Great Blue Heron by toxic substances

There are many different factors that can impact bird populations, from climatic conditions to human disturbance. Despite conservation and protection efforts, toxic substances transported through water and air from large urban and industrial centres and from agricultural areas can accumulate in the environment and have harmful effects on wildlife. A large number of chemicals, including organochlorine pesticides (such as DDT), polychlorinated biphenyls (PCBs) and polybrominated diphenyl ethers (PBDEs), break down very slowly and tend to accumulate in increasingly higher concentrations at each successive level of the food chain. For that reason, fish-eating birds are often used as bioindicators of ecosystem health. 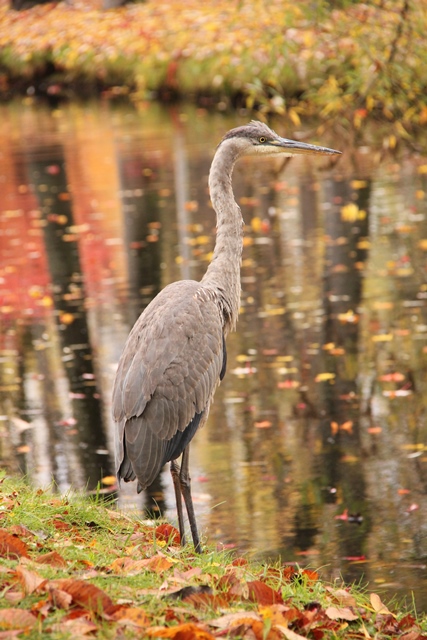 The Great Blue Heron was selected as a sentinel species, or bioindicator, of the state of the St. Lawrence because it occurs in both marine and freshwater environments, occupies a position at the top of the food chain, and has a relatively limited foraging range. Contaminant concentrations in Great Blue Heron eggs indicate local contamination of the ecosystem they are breeding in. At high concentrations, a number of contaminants are extremely toxic and can cause mortality. At the concentrations typically observed in the environment, these contaminants are less toxic but can have adverse effects on essential biological functions, such as growth, reproduction and ability to fight infection. For instance, some chemicals closely resemble hormones and can interfere with the transmission of chemical messages responsible for proper functioning of the organism.

Overview of the situation

A migratory species sensitive to disturbance, the Great Blue Heron nests in colonies, or heronries, in treetops, typically on islands in lakes or in beaver ponds that are relatively inaccessible to humans and terrestrial predators. These colonies can be found in every region of Quebec, including some 30 along the St. Lawrence, from Lake Saint-François, upstream, to Sept-Îles and the Magdalen Islands in the Gulf (Figure 1). Colonies vary in size from year to year but typically number roughly several dozen pairs. After a period ranging from several years to several decades, depending on the size of the colony, the heronries begin to decline and are abandoned. The herons must then find a new nesting site. Human disturbance and predation can also impair reproductive success and result in the abandonment of a colony. Every 5 years, the Ministère des Forêts, de la Faune et des Parcs du Québec conducts a survey of known colonies. In 2012, the survey found 242 active colonies, of which 171 had at least 5 occupied nests. The largest colony in Quebec is located in the Grande-Île Wildlife Preserve in the archipelago of Lake Saint-Pierre and contains close to 700 nests. The total Quebec population of Great Blue Herons is estimated at approximately 27 000 individuals, one third of which nest along the St. Lawrence. These results must be interpreted with caution, however, since the survey covers only known heronries, rather than all heronries.

Figure 1. Location of Great Blue Heron colonies in the St. Lawrence, sections of the river and test sites outside of the river

Map of the study area, namely the St. Lawrence River from Cornwall to the Gulf, showing the locations of Great Blue Heron colonies. The map also indicates the sections of the river, namely the fluvial section, fluvial estuary, upper estuary, lower estuary and Gulf.

In the 2012 survey of Great Blue Heron colonies, the average number of young per clutch was 2.95 in the St. Lawrence (Figure 2), compared with 2.35 in Quebec as a whole, while average productivity (number of fledglings relative to the number of eggs laid, expressed as a percentage) could not be estimated. The average number of young per clutch seems to be increasing in the St. Lawrence colonies and remaining stable elsewhere. With this relatively high nesting success in the St. Lawrence, although the number of nests seems to have declined, the heron population should remain stable, since herons typically lay 5 eggs and rear an average of 2.2 young to fledging. However, the population may be affected by other factors, and long-term monitoring is needed to document the trends observed.

Figure 2. Nesting success of Great Blue Heron (number of young per nest) in St. Lawrence colonies from 1977 to 2012

Note: Figures in parentheses indicate the number of colonies used in the calculations.

Histogram where the x-axis represents the period (eight periods from 1977 to 2012) and the y-axis represents the average nesting success (number of young per nest). Each bar corresponds to an average value for multiple colonies for the period, and the number at the top of the bar indicates the number of colonies used in the calculations. Success ranges from approximately 2.2 to 2.95, with no observable trends.

Previous editions of this fact sheet provided contamination data for eggs and for young herons. However, monitoring of young was discontinued following a review of the Great Blue Heron monitoring program, and now only eggs are harvested every five years in four colonies. In 2011, the following colonies were sampled: Île aux Hérons and Grande-Île, in the fluvial section; Île aux Basques, in the lower estuary; and Île Manowin, in the Gulf. The colonies are visited between late April and late May. Since Great Blue Herons nest in treetops, a professional climber is hired to retrieve one egg from each nest. The eggs are placed in a padded box, which is lowered to the ground by rope. The eggs are kept cool and sent to the laboratory to be analyzed for mercury,1 PCBs,2 organochlorine pesticides (e.g., DDT3),PBDEs4 and sometimes dioxins and furans.5 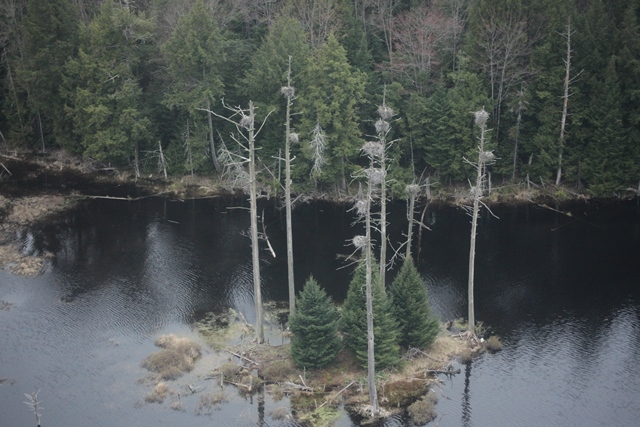 Due to fluctuations in the size and presence of colonies, it is sometimes difficult to monitor the same colony over a long period. Therefore, the colonies are grouped by region (Figure 1), and the contaminant concentrations presented are the average concentrations for each region. The contaminants or contaminant groups presented are the most abundant contaminants or the contaminants of greatest concern found in Great Blue Heron eggs. Concentrations of mercury, PCBs, DDE (the main breakdown product of DDT) and a number of other organochlorine pesticides have declined since this program was launched in 1991 (Figure 3). The contaminant concentrations show few differences from region to region, both along the St. Lawrence and when compared with the control colonies located inland. PBDEs, a new group of toxic substances used as flame retardants, were analyzed for the first time in Great Blue Heron eggs that had been collected in 2001 and 2002 (Figure 3). During this period, concentrations of total PBDEs in Great Blue Heron eggs were on the same order of magnitude as those of DDE and PBDE concentrations measured in Herring Gull eggs from the Great Lakes. These emerging substances pose concerns because they have similar properties to PCBs. However, they too have clearly declined since 2001. These declines are the result of numerous regulatory measures and voluntary phase-outs by companies, both in Canada and around the world, as well as the gradual elimination of contaminants accumulated in the environment.

The concentrations of the main contaminants measured in eggs collected in 2011 in the four colonies now being monitored were compared with the values measured since the beginning of the program and with toxicity indices (Figure 4). The average decline in the various contaminants since the beginning of the program is 63% (range 41–94%) on Île aux Hérons, 66% (36–97%) on Grande-Île, 34% (41–94%) on Île aux Basques and 59% (36–97%) on Île Manowin. On average, mercury decreased by 40%, PCBs by 63%, DDE by 83%, tetrachlorodibenzodioxin toxicity equivalent (TCDD-TEQ)6 by 27% and PBDEs by 67%. Concentrations of mercury, PCBs, DDE and TCDD-TEQ are below published index levels on effects on reproduction or survival. In the case of PBDEs, the only published index is for penta-BDE concentrations in bird eggs. Penta-BDE concentrations in the eggs were well above the index during the 2001– 2002 sampling campaign and were still close to this value in 2011, despite having declined considerably. These indices must be used with caution, however, because they are typically based on studies conducted on other species and include an uncertainty factor. Exceedances of these concentrations do not necessarily result in harmful effects.

Figure 4. Comparison of concentrations of contaminants in Great Blue Heron eggs with toxicity indices; the red lines represent the indices

Figure 4 shows five stacked histograms where the x-axis represents the four colonies that were monitored and the y-axis represents the concentrations of mercury, total PCBs, DDE, TCDD-TEQ and penta-PBDEs in eggs, from top to bottom. The historical values for each contaminant are compared with the 2011 values and with a toxicity index. The TCDD-TEQ data are for 2001 and 2006.

1 Mercury: Mercury is a naturally occurring element found in the Earth’s crust. About half of the mercury currently present in the environment comes from human activity (such as coal burning and waste incineration), while the other half can be attributed to natural sources and processes. Mercury is persistent and builds up in living organisms.

2 Polychlorinated biphenyls (PCBs): A class of 209 chemicals (classified into groups ranging from monochloro- to decachloro- PCBs depending on the number of chlorine atoms) that were used as dielectrics in electrical transformers and capacitors, as heat exchange fluids, as paint additives and in plastics, cutting oils and inks. In 1977, concern over the impact of PCBs on the environment led to a North American ban on manufacturing and importing PCBs.

3 Dichlorodiphenyltrichloroethane (DDT): First registered as a pesticide under the Pest Control Products Act in the 1940s. Although DDT was never manufactured in Canada, it was widely used in pest control products until the 1960s. Most uses of DDT in Canada were phased out by the mid-1970s. DDE (or p,p’-DDE): The most persistent and toxic breakdown product of DDT.

4 Polybrominated diphenyl ethers (PBDEs): A class of 209 chemicals (classified into groups ranging from mono- to deca- BDEs depending on the number of bromine atoms) used in polyurethane foams, electronics, textiles, plastics and other materials as flame retardants to slow the spread of fire. In 2006, the use of penta-BDE (5 bromine atoms) and octa-BDE (8 bromine atoms) began to be phased out internationally and in Canada. 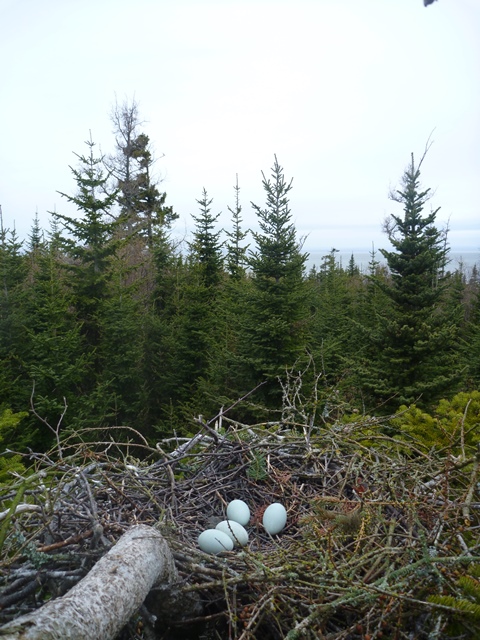 Long-term contamination monitoring programs have great scientific value. The analysis of the main historical and emerging contaminants in Great Blue Heron eggs provides an indication of the birds’ real exposure to bioaccumulative toxic substances and of the potential effects of these substances. The known colonies survey and the average number of young per clutch provide essential information for assessing the health of the Great Blue Heron population. These data are extremely valuable because they can be used to report on the state of and trends in contamination of a key indicator species for the St. Lawrence River ecosystem.

The contamination levels to which Great Blue Herons are exposed in the St. Lawrence River are generally below the toxicity threshold for survival or reproduction. However, the results for all contaminants measured in Great Blue Heron eggs (not presented in this fact sheet) reveal differences between colonies and between the regions of the St. Lawrence, thus reflecting local and regional variations in contamination. Furthermore, new industrial chemicals regularly enter ecosystems and may be added to the monitoring program. Low contaminant concentrations, combined with stress associated with weather conditions, food availability and habitat disturbance and loss, can interfere with the functioning of the organism and pose a risk to wildlife populations. Ecological tracers in Great Blue Heron eggs have recently begun to be analyzed in order to obtain data on changes in the food chain and ecosystem. Long-term monitoring of contaminants and the population is critical to the assessment of the health of the Great Blue Heron population, and contributes to state of the St. Lawrence reporting. 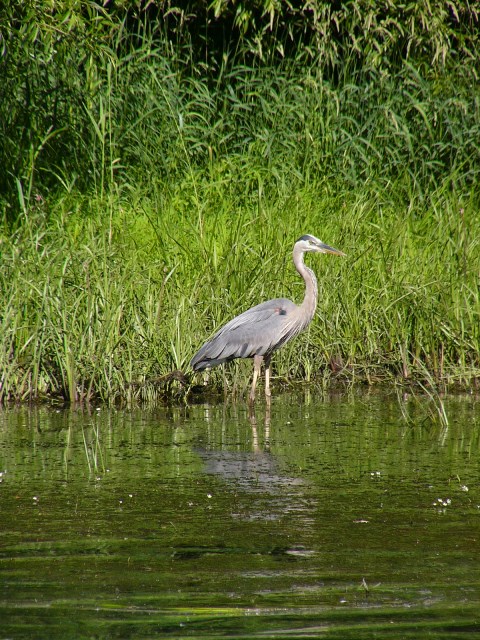 The symbol in this document was graciously provided by the Integration and Application Network site at the University of Maryland Center for Environmental Science (ian.umces.edu/ symbols/).

Published by authority of Quebec’s Minister of Sustainable Development, Environment and the Fight against Climate Change
© Government of Quebec, 2015