Trend: In both sectors of Lake Saint-Louis, the mean concentrations of the majority of substances decreased between 2003 and 2015.

Figure 1. Sediment sampling sites in Lake Saint-Louis between 2003 and 2015 and contamination index

Lake Saint-Louis sediment quality monitoring took place in 2003 and in 2015, as changes in contaminant concentrations occur only very slowly and are perceptible on a 10-year time scale. The sediments of Lake Saint-Louis were sampled by Environment and Climate Change Canada (ECCC) and tested for numerous contaminants. The results presented in this factsheet refer to the northern and southern sectors of the lake as a function of sampling location relative to the St. Lawrence Seaway.

Status in 2015: The overall sediment quality status of the northern sector of Lake Saint-Louis is considered good. Of a total of 53 samples collected north of the St. Lawrence Seaway, 60% showed concentrations below the threshold effect levels (TEL) used to assess sediment quality.

Mean concentrations of metals, mercury, PCBs, polybrominated diphenyl ethers (PBDEs), dioxins and furans, and polycyclic aromatic hydrocarbons (PAHs) are all below their respective TEL, with the exception of dibenzo(ah)anthracene which slightly exceeds its TEL (Table 1).

Table 1. Mean concentrations of the various substances measured in sediments (0 - 3 cm) from the northern sector of Lake Saint-Louis between 2003 and 2015

(1)    EC and MDDEP. 2007; Exceedances of criteria are indicated in red.
(2)    Mean: The mean values presented correspond to the geometric means of the measured values – the geometric mean is a good trend assessment tool.

Changes from 2003 until 2015: Over this period, the mean concentration of the metals index decreased by 14%, which indicates that the river system still has the capacity to recover from past disturbance. Taken individually, several metals are found at concentrations almost identical to their natural levels (see Table 3 in EC and MDDEP, 2007). Since the ban on PCBs in the late 1980s, their mean concentration has continued to decline at a rate of about 30% by decade. With the regulation of PBDEs in 2008, concentrations of these substances of emerging concern are now decreasing. Mean concentrations of various PAHs, with the exception of  dibenzo(ah)anthracene, were all below their quality criteria in 2003, and the variations observed in 2015 are not significant. Based on the current trend, which decreased by 16% between 2003 and 2015, the mean concentration of dibenzo(ah)anthracene is expected to reach a level below its criterion within a decade.

Status in 2015: The overall sediment quality status of the southern sector of Lake Saint-Louis in 2015 is rated as moderate-poor. Of the 42 sediment samples collected from the area south of the St. Lawrence Seaway, over 72% showed concentrations above the TEL. These exceedances are mainly related to the presence of mercury, PCBs, furans and PAHs (Table 2).

Changes since 2003: Between 2003 and 2015, mean concentrations of all substances decreased a significant 12% to 53%, except certain PAHs, which are present at very low concentrations and show non-significant variations. Mercury is the main contaminant, with a mean value 1.5 times above its quality criterion. It decreased by less than 15% between 2003 and 2015, compared to PCBs, which decreased by more than 40% over the same period. As with mercury, furans decreased by only 13% and remained well above their TEL. Finally, as shown by the 34% decrease recorded for the PAH index, several of these substances, including those that were present at the highest concentrations in 2003, decreased by at least 30%, indicating a good recovery of the aquatic environment for these contaminants.

Table 2. Mean concentrations of the various substances measured in sediments (0 – 3 cm) from the southern sector of Lake Saint-Louis between 2003 and 2015

(1)    EC and MDDEP. 2007; Exceedances of criteria are indicated in red.
(2)    Mean: The mean values presented correspond to the geometric means of the measured values – the geometric mean is a good trend assessment tool.

The results show that the majority of the contaminants measured in Lake Saint-Louis sediments in the northern and southern sectors have decreased over 12 years between 2003 and 2015. The temporal profiles performed on a sediment core taken in the Îles de la Paix basin confirm this downward trend for all contaminants (Figure 2). The decrease in concentrations began with the implementation of the various environmental controls and regulations. Current concentrations are similar to those measured in the 1940s and 1950s and, over the coming decades, they could reach the minimum concentrations recorded at the start of the last century.

Spatial analysis oThe spatial distribution maps presented in figures 3 to 5 show the main areas contaminated with PCBs, furans and mercury, respectively. Again, in 2015, these three contaminants are the most abundant and still pose a risk to aquatic life in Lake Saint-Louis. 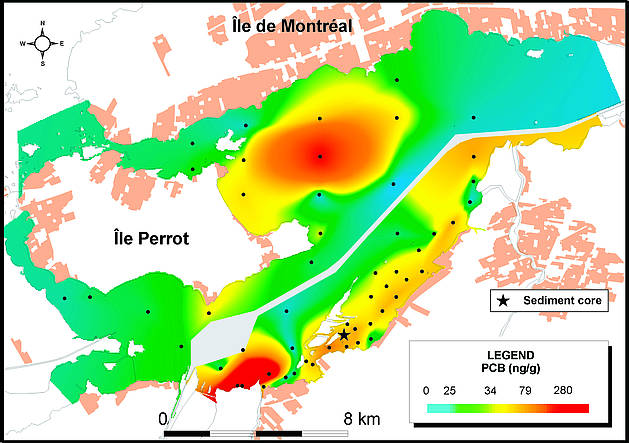 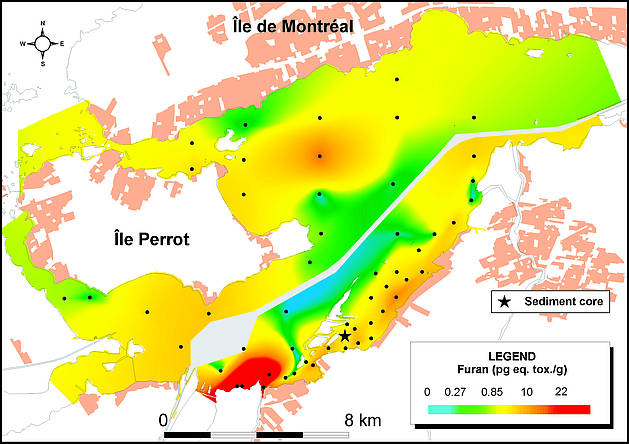 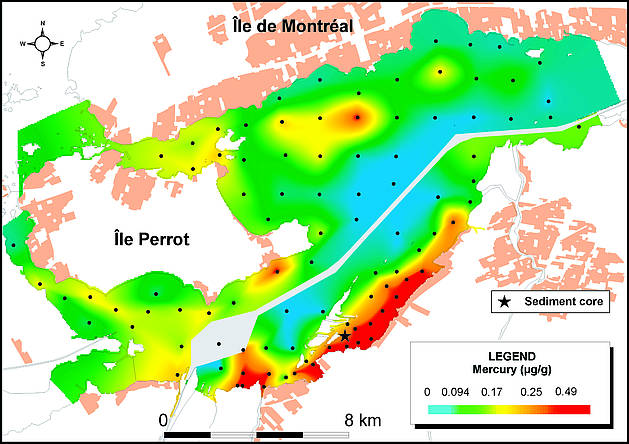 The area between the Beauharnois dam and the outlet of the Îles de la Paix basin is still significantly affected, although mean concentrations of PCBs, furans and mercury decreased by 12% to 42%. The complete recovery of this sedimentary area could take several more decades, as the section of the river near Beauharnois is dynamic with strong currents and frequent sediment resuspension.

Moreover, the land along the southern part of the area was heavily industrialized in the mid-20th century, and the rainwater that drains this territory is likely still contaminated when it flows into the river. The sedimentary basin located in the northern sector of Lake Saint-Louis still contains concentrations exceeding the sediment quality criteria, although the means are now below the criteria. This area should recover completely in the coming decades, given that contaminant inputs, mainly from the Ottawa River, have decreased significantly.

Concentrations of toxic substances resulting from the industrial boom in the middle of the 20th century, such as PCBs, mercury and other metals, PAHs, and dioxins and furans, have significantly declined in the surface sediments of Lake Saint-Louis. In the northern sector, concentrations are below the values of the quality criteria for the protection of aquatic life, while in the southern sector, exceedances are still observed, particularly for PCBs, furans and mercury, and certain PAHs.

Sediment quality in the northern sector of Lake Saint-Louis can be considered good, even though there are still some local criterion exceedances. The southern sector remains highly contaminated, despite the various remediation measures taken since the 1980s. Environmental monitoring remains necessary in order to measure the trend towards recovery over the coming decades.

My thanks to Michel Arseneau, Germain Brault, Claude Lessard and Simon Blais of Environment and Climate Change Canada for their contributions to the fieldwork.

Thanks also to Simon Blais for the financial contribution from the Environmental Protection Operations Directorate under the St. Lawrence Action Plan.