Monitoring Changes in the State of the St. Lawrence

What is the State of the St. Lawrence Monitoring Program?

Under this program, officially launched in 2003, partners pool their expertise in regular reports on the state and evolution of the St. Lawrence River. The results of this monitoring are made available in a series of fact sheets, at the Rendez-vous St. Lawrence event and in the Overview report, which is published every five years.

How is the St. Lawrence doing?

The 2014 Overview presents the most recent findings emerging from the work conducted under the program. In 2014, the St. Lawrence River’s bill of health presents a delicate balance. Most indicators remain moderate. Following the reintroduction of the Striped Bass, we are seeing significant progress in the natural reproduction, growth and distribution of this species in the river. However, the St. Lawrence remains relatively vulnerable. Furthermore, the Beluga Whale and Northern Gannet populations have experienced significant degradation.

Figure 1 presents a summary of the evolution of some indicators from 2003 to 2014. 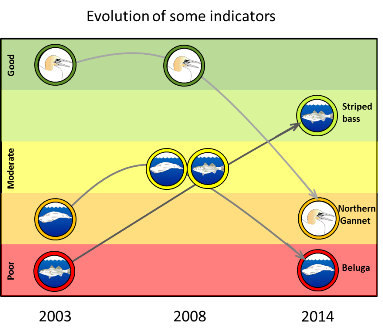 Figure 1. Evolution of the state of the Striped Bass, Northern Gannet and beluga indicators, from 2003 to 2014.

The Overview Highlights are also available in printable version (PDF).

According to the index of bacteriological and physicochemical quality (IQBP), water quality was in the moderate-good category in 2008-2010. However, the percentage of stations where IQBP was good or satisfactory decreased from 75% in 2003-2005 to 67% in 2008-2010.

In terms of toxic water contamination, the substances of most concern are PBDEs, and pharmaceuticals and personal care products.

Regarding the toxic contamination in sediments, the fluvial section between Montreal and Sorel has the largest numbers of most highly contaminated sediment sites and the highest number of substances exceeding the criteria.

As for fish contamination in the fluvial lakes, only mercury in Walleyes and Northern Pikes in Lake Saint-Louis, and PBDEs and PCBs in White Suckers in Lake Saint-Pierre are still a concern.

Among the contaminants measured in Great Blue Heron eggs, only PBDEs slightly exceeded the criteria at three of the four colonies analyzed.

The St. Lawrence beluga population is still threatened, but the situation has worsened due to a decline in abundance, high mortality of newborns in 2008, 2010 and 2012, and a decrease in the proportion of immature belugas and newborns.

Northern Gannets are showing signs of difficulty with a loss of abundance and a significant decline in reproductive success. However, the concentrations of toxic contaminants in eggs are all below the criteria.

The shellfish waters of the Magdalen Islands and the Lower North Shore are of excellent quality. However, shellfish waters in the Gaspé Peninsula and Lower St. Lawrence are more strongly affected by anthropogenic bacterial contamination.

The fluvial section and Sorel islands have a diminished richness of benthic macroinvertebrates and a higher proportion of species tolerant to pollution.

The health status of fish communities has remained stable overall since 1995. However, in Lake Saint-Pierre, Yellow Perch haw suffered a major decline, mainly due to the degradation of its habitat.

The loss of wetlands due to direct human intervention declined sharply. However, the Boucherville Islands sector is still undergoing relative drying and the wetlands of Lake Saint-Pierre sector are bordered by a low proportion of natural environments.

Boucherville and Lake Saint-Pierre are the sectors most heavily affected by invasive plants. The most problematic species is the Common Reed.

Striped Bass is showing encouraging signs of recovery. Its distribution, rate of growth and abundance are improving. The natural reproduction of Striped Bass demonstrates that the species is in a favorable environment; this progress marks an important milestone for the species' recovery in the St. Lawrence River.

Among the oceanographic processes, several physical changes (milder, almost ice-free winters, early springs, and the warming of summer surface waters) have been observed in the Gulf over the past decade.

The increased warming of surface waters in summer increases the risk of toxic algal bloom.

Among the seabirds, the populations of Herring Gulls, Common Murres and Razorbills are in good shape, while the Atlantic Puffin population has been declining since 1993, and Caspian Terns are still very scarce.

Who are our partners?

The Government of Canada:

The Government of Quebec: