Aquatic invasive species in the marine section of the St. Lawrence

The current status (2013-2015) of the aquatic invasive species (AIS) situation in the marine section of the St. Lawrence in Quebec is assessed as being “Intermediate-Good“. The current relative invasion index ratings for the three maritime areas are “Intermediate“ for the Magdalen Islands and “Intermediate-Good“ for the Gaspé Peninsula and the North Shore. These results represent an increase in the indicator category over the last decade for the Magdalen Islands and the North Shore, while it has remained stable for the Gaspé Peninsula.

The invasion index represents the sum of the proportions of monitored sites that are occupied by a given aquatic invasive species in each surveyed year. A given AIS is given a value of “1” when it was observed at all sampling sites in the marine area. For each area, an average invasion index was calculated over periods ranging from three to four years.

The relative AIS status category (Good, Intermediate-Good, Intermediate, Intermediate-Poor, Poor) is determined by comparing the status of marine AIS in Quebec with that of the east coast of Canada, where a total of 11 AIS have been observed as part of a Fisheries and Oceans Canada monitoring program. An invasion index of 11 therefore represents the maximum value that an area could obtain if all AIS were present at all sampling sites. The average invasive indices for each area were classified into five status categories:

The overall status for the marine portion of the St. Lawrence system in Quebec was established by calculating the average of the invasive indices obtained in the three maritime areas.

An aquatic invasive species is defined as a non-indigenous plant, animal, or micro-organism (virus or bacterium) that is introduced to an area beyond its natural range and which, has successfully established there, and whose spread has important ecological, economic and social consequences. The presence of these species is a growing concern on a global scale in marine and freshwater environments.

AIS have attributes that facilitate their establishment and propagation in new environments. Indeed, AIS generally have broad tolerances to environmental conditions and possess great genetic variability. They often grow rapidly and are able to adapt to diverse environments. AIS are also able to reproduce and disperse rapidly and generally have few predators, parasites or competitors.

AIS may be introduced into and disperse from new environments in a variety of ways. AIS disperse beyond their initial place of origin to new regions, through voluntary or involuntary means, through a variety of transfer mechanisms, or vectors. Although dispersal may occur through natural phenomena such as currents, floods or migration, most AIS introductions are linked to human activities. The main anthropogenic vectors include commercial shipping and recreational boating (ballast water and sediments and hull bio-fouling), aquaculture, commercial and sport fishing activities, fisheries and aquaculture products processing, and the live fish, water garden, and hobby aquarium trades.

AIS may compromise ecosystem integrity. In addition to affecting native species through predation and competition for habitat and food, AIS may also decrease the genetic diversity of native species via hybridization and endangering rare or vulnerable species. The impacts of AIS on ecosystems are often major and irreversible.

Several areas of important economic activities, such as aquaculture, recreational and commercial fisheries, and several recreational tourism activities, may be affected by AIS. By reducing the quality and attractiveness of these activities, AIS may reduce revenues and necessitate significant recurring costs. For example, invasive tunicates must be continually removed from mussels farmed in aquaculture.

Overview of the current situation

The status of marine AIS is based on the results of a monitoring program led by Fisheries and Oceans Canada, in collaboration with Merinov, aquaculture farmers, and fishermen, in three marine areas: the Magdalen Islands, the Gaspé Peninsula, and the North Shore of the Gulf of St. Lawrence. Program objectives are to detect new AIS as early as possible, monitor their dispersal, and minimize the risk of their introduction and dispersal through public awareness and rapid response.

Invasive tunicates and other sessile species

This component of the program began in 2006 for the Magdalen Islands and Gaspé Peninsula areas and in 2009 for the North Shore area. Collectors are used to detect and monitor sessile AIS, particularly invasive tunicates (Figure 1). Sampling efforts are concentrated in sites with the highest risk of introduction: marinas, commercial and fishing harbours, and aquaculture sites. From June to October, a minimum of six collectors are installed at the various sampling sites about one meter below the water surface, attached to port or anchorage infrastructures. Scuba diving surveys are also done on a regular basis at the sites of greatest concern, or to assess the situation following the discovery of a new AIS.

Figure 1: Diagram of a detection collector and examples of recovered samples

Diagram showing a detection collector made of 3 PVC plates and 3 petri dishes; photo illustrating a collector infested with invasive tunicates.

Green crab (Carcinus maenas) monitoring began in 2005 in the Magdalen Islands. The methodology consists of deploying nine Fukui traps about one meter deep at low tide for 24 hours. The traps are ideally placed in seagrass meadows, a preferential habitat of this invader.

Although the oyster thief green alga (Codium fragile spp. fragile) is not subject to a specific monitoring program, some anecdotal and research project data have been used to provide an overall picture of the status of AIS in Quebec.

Figure 2: A summary distribution of the invasive species present between 2003-2015; the pie charts may represent several sampling stations, which are indicated by black dots 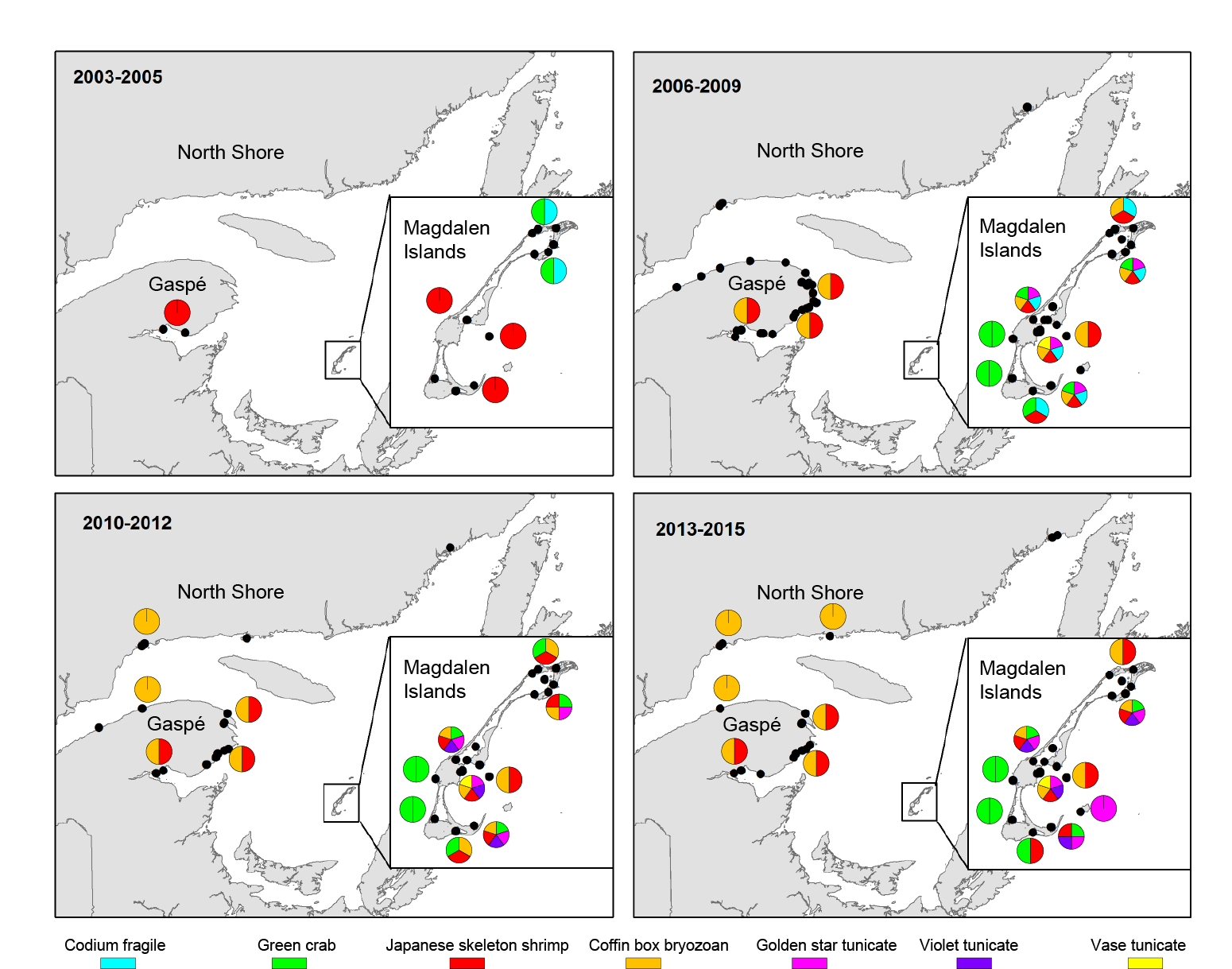 In the Magdalen Islands, the invasion index increased gradually from 2003 to 2011 (Figure 3). This is explained by the detection and dispersal of several new invasive species: oyster thief in 2003, green crab and Japanese skeleton shrimp in 2004, golden star tunicate and vase tunicate in 2006, coffin box bryozoan in 2007, and violet tunicate in 2010. Infestation by invasive tunicates has increased significantly in the Islands, with the golden star and violet tunicates now being present in most water bodies. On the other hand, the distribution of the vase tunicate, an AIS of great concern to the mariculture industry, appears to be presently limited to the port of Cap-aux-Meules.

The invasion index remained relatively stable between 2011 and 2013 and then declined in 2014. The index decline is due to a decline in green crab observations, beginning in 2014. First observed in 2004, green crab spread rapidly throughout the Magdalen Islands and reached maximum catch per unit effort (CPUE) in 2012. Subsequently, CPUE dropped and no green crab were caught in 2015 during annual monitoring or by eel fishermen. Different assumptions are being examined to try to understand what caused the green crab population to decline in the Magdalen Islands

The temporal evolution of the invasion index categories, when classified into relative categories, shows it to increase since monitoring started (2003-2005) for the Magdalen Islands and North Shore areas, while it remained stable in the Gaspé Peninsula area (Figure 4). However, average indices have remained stable since the 2010-2012 period in all areas.

Several AIS are already established in the St. Lawrence and several more species are at our doorstep. The results of the monitoring program show that the number and abundance of AIS in the St. Lawrence are increasing and the invasions are continuing. In the context of climate change, these trends are likely to increase as environmental conditions may become more favorable for the survival of new AIS.

Once AIS are established in an ecosystem, it is difficult, if not impossible, to eradicate them. Preventing the introduction and establishment of AIS remains the most effective and least costly approach to address these invaders as this avoids the considerable costs that may be associated with their eradication, control, and management. Although it is difficult to reduce the risks associated with natural vectors, it is possible to better control certain human activities that facilitate the introduction and spread of these undesirable species, either through public awareness activities or regulatory tools.

Early detection of AIS is paramount in the fight against invaders. It allows AIS to be detected as soon as they arrive, a rapid response to prevent their establishment, and reduces the risk of them being spread to other environments. The establishment of ongoing monitoring programs and the involvement of many collaborators are essential to maximize the possibility of detecting a species as soon as it appears. Following early detection, a rapid response plan should be in place so that the various partners may respond in a structured way to control the detected species. In addition, research is essential to the fight against AIS; it allows the development or improvement of detection and control methods and a better understanding of the impacts of these species on ecosystems. 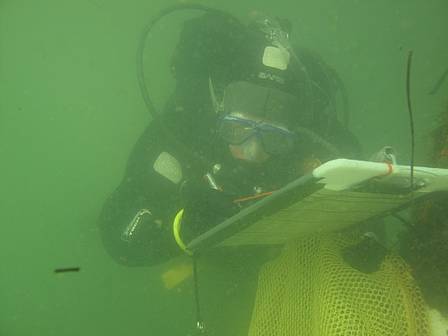